For the past four years I’ve spent my Tuesday evenings tucked away in the studio of the Derwent Valley’s community radio station, TYGA FM, bringing back fabulous music from the 1980s that never really went away.

I haven’t written much about my life in community radio, because there didn’t seem to be much connection between an 80s-music loving tragic and the world I write about here. However, today marks the end of my journey with community radio and it feels like a good time to reflect on where it’s taken me.

I never intended to be on air. It was Slabs’ thing. He was involved with the station from very early on in its life, helping to set it up in 2009. His Sunday evening show is one of the few original shows from 2009 still on air, and he was President for almost four years.

The story of how I came to be involved goes like this:

Slabs and Kramstable filled in for one of the other presenters when he was away for a few weeks, back in 2012. Kramstable loved this, and set himself up as a radio presenter at home. Slabs asked him if he wanted to do his own show, which he absolutely did, and so a couple of weeks before his sixth birthday he launched his show, which was then called Sunday Recess.

I wasn’t going to be outdone by a six-year-old, and I had this germ of an idea for a show of my own, which I developed during my daily walks. (This is where I get most of my ideas.) It was going to be a 1980s music show with a twist. Each week I’d feature an artist who had been successful in the 80s, but rather than look at their 80s material, I’d look at where they’d come from and what they’d become post their 80s career. So I’d take material from their previous bands, later spin-off bands, solo work, work they’d produced, cover versions of their material – whatever they’d done.

The original idea was that I’d play six to eight songs for each week’s feature artist and talk a bit about their history, then for the rest of the show I’d play a mixed bag of 80s tracks from all over the place.

And so it came to pass, and after three or four weeks in the TYGA FM Sandbox, which was our on-air training slot, I did my first show of Octogenarius on 25 September 2012. The first artist I looked at was Paul Kelly, because I could think of no one better than my favourite artist to launch the show. I loved it.

Notes from my first show

My on-air persona was called Dolly Ringwald, obviously in honour of 80s poster child Molly Ringwald. Dolly may or may not be connected to Dolly Parton, but I don’t think I’ve played a single song of hers on the show.

Over time the format changed, and I started to fill the whole hour with material from the feature artist. This was great, because I could explore their career more fully, but it also started to take a lot of time to prepare. From a few jotted notes, I went to a typed script and a fully programmed playlist that was taking me four or five hours to prepare each week. This isn’t an amount of time that’s easy to find during a typical week, and it started to feel like a burden rather than something I was doing because I enjoyed it.

So rather than stop, I went from a structured show to a show where I played whatever took my fancy at the time. All from the 80s of course. I’d occasionally do a themed show: Hair metal, Pub rock, and a feature called “Dolly’s Diary” where I played tracks from artists who were born on that day. And a Eurovision show to coincide with the Eurovision Song Contest each year. That was always fun.

A highlight was participating in the Women in Community Radio Program in 2014,  which involved managing a small project at the station and presenting a report to the national Community Broadcasting Association Conference. This was a fantastic opportunity, and I met some fabulous women in the sector who are out there doing great things! And the project I did has links to what I’ll be doing a bit later in my #steppingonthecracks project, so I feel like I’m not completely abandoning this part of my life.

But although it’s great to be on the radio, in the past 12 months or so I’ve been feeling that it’s not working for me.

I’m not putting the effort into the show that I think it deserves. I don’t feel passionate about turning up each week and throwing some songs on. I want it to be more than that, but right now there are other things that are more important to me than researching a new show each week. I’ve increasingly been feeling like if I can’t give the show the attention that I want to, then maybe it’s time to step away.

I’d been reluctant to say anything about this because it’s been something that we’ve all been involved in for so long that I felt like I’d be letting the team down if I quit. I know this isn’t the case, and my decisions are my own, but it’s how I’ve felt. Realistically I probably should have done this 12 months ago, but I have enjoyed having a double life and revisiting musical memories from my teenage years. But recently a couple of planets have aligned, and I’ve finally, belatedly, felt able to the plunge. Or jump out of the frypan. Or something.

So tonight is my final show. I have mixed emotions about this because I’m still enjoying doing the show – it’s just that the spark isn’t there.

There are some songs that lend themselves to my final playlist. The Final Countdown by Europe comes to mind, as this was the very last song that was played on Countdown. But if my timing’s right, my last song will be the very first one I played on my first show back in September 2012.

Thank you to everyone who has been on this journey with me and given me the opportunity to have this experience. It’s been fun.

If you feel that way inclined, you can listen to my final show on 98.9 Tyga FM in Tasmania at 8.00 pm tonight or livestream it.

And I think I’ll keep Dolly alive for now, at least in social media so @octogenarius lives, as does TYGA FM-Octogenarius.

And for the history of Octogenarius and play lists look no further than my AMRAP page. And that’s it.

I’ll miss all this, but I’m grateful for the opportunities I’ve had and for the chance to take what I’ve learned forward into my next adventure.

This week started off as part of a five-day weekend. I had a day of leave on Friday, a weekend, a public holiday on Monday and then another day off on Tuesday.

On Monday Juniordwarf and I filled in for a presenter who’s taking some time off, at our community radio station TYGA FM on Monday’s midday show, The Time Tunnel. This is a show that features music from a particular year. We looked at 1981 and played Australian music for Australia Day.

Juniordwarf was very excited that we were going to have another day together on Tuesday. I was excited too. We hadn’t had a lot of time together these holidays, so it’s been great to have a few days where it’s just him and me doing pretty much whatever he wants to do.

It was a really relaxing break. We didn’t have to go anywhere or do anything apart from the radio show. It was good just to be at home and potter around and spend some time together. It made me miss the days before school started when I’d have a day (or two days before he started kinder) at home with Juniordwarf and I actually felt like a proper mum, instead of someone racing between home, school, work, school and home every day, with hardly a second to take a breath in between.

Sadly, it had to end, and I went back to work on Wednesday.

I’ve kept up with my walking in the mornings and I’m trying to adjust my wakeup time to be able to do the walk I want to do and still give myself time to be ready at the time we need to leave.

I exceeded my 13,000 daily step goal every day, so I’ve increased my goal to 16,000 steps a day leading up to the CARE Walk In Her Shoes challenge in March.

Getting ready for the CARE WIHS Challenge

Ducklings I saw on my walk on Saturday morning

The most interesting thing that happened was that our new chickens, which we got at New Year, have finally started getting up onto the perches in the chook house by themselves at night.

One of the new chickens

We saw this bird in the garden on Saturday (dodgy photo because I took it through the kitchen window on maximum zoom).

Bird in our garden

This was an interesting ‘uncover’ on the main street I noticed during the week. When we first moved here, this shop was called Cooper’s and it was a hardware store. It was most recently True Blue, which had been a real estate agency as well as a removalist service and a ‘bits & pieces’ store. It closed down at the end of last year and is now a store selling local hand-made crafts – but as they’re doing it up, the old Cooper’s awning was uncovered.

Our local community radio station organised a World’s Greatest Shave event today. Slabs is a board member of the radio station, as well as being a presenter. 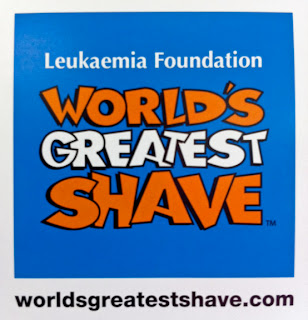 For anyone not familiar with this event, it is a national fundraiser organised by the Leukaemia Foundation to raise funds for supporting patients with leukaemia and other blood disorders, as well as funding for blood cancer research. It’s been an annual event since 1998.

The idea is that people commit to shaving (or colouring) their hair and get sponsorship for doing it.

A local hairdresser donated her morning to shave and colour the participants’ hair. Local councillors and radio station team members signed up to get their hair shaved or coloured, and community members were invited to donate and participate as well. Slabs and his radio colleague (who is currently searching for an appropriate nickname) manned the sausage sizzle during the event.

Bizarre colours were the order of the day, with Slabs being one of the few who actually went for the full shave and colour option.

Here is his transformation. 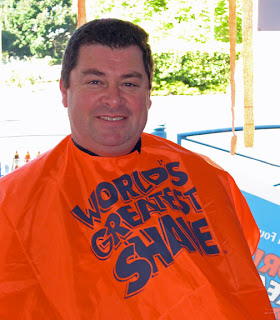 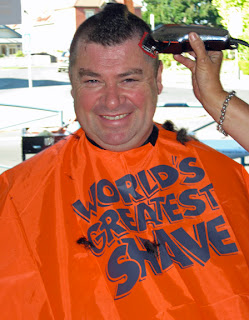 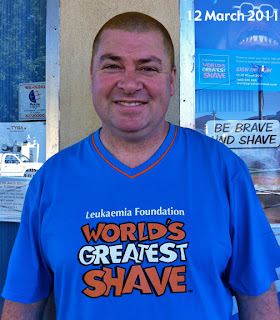 And here’s Juniordwarf checking out his Dad’s new hairdo. 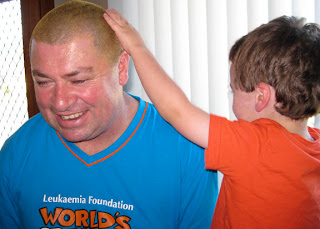