Today was the last day of the school holidays. Kramstable and I went to the Tasmanian Museum & Art Gallery (TMAG).

We started out in the Bond Store and looked at the Tasmanian displays. Kramstable pointed out the Tasmanian Native Hen, which he had done a project on at school recently.

Learning about weights and measures

A Journey to Freedom is a new contemporary art exhibition guest curated by Swiss curator Barbara Polla together with Olivier Varenne and Mary Knights.

A Journey to Freedom explores issues relating to incarceration from a range of different cultural and historical perspectives: from Tasmania’s dark convict past; to ‘doing time’ in the notorious “Pink Palace” Risdon Prison; and the experience of refugees held in camps and detention centres in Australia and beyond.

The exhibition brings together new and recent works by contemporary national and international artists working across installation, sculpture, video, photography and virtual reality with works to be presented across the museum’s temporary galleries and transitional spaces.

Shaun Gladwell’s virtual reality work Orbital vanitas will be presented in TMAG’s Central Gallery, providing visitors with an immersive experience of being placed inside an enormous skull that is orbiting the earth.

A Journey to Freedom is presented by Dark Mofo, Mona and the Tasmanian Museum and Art Gallery (TMAG).

A Journey to Freedom

The exhibits are scattered around TMAG and we didn’t see all of it but what I did see was thought-provoking and interesting.

I found the work by Ali Kazma on the structures in which people are incarcerated interesting and powerful. “Although nobody appears in the footage, the bleak brutality of the architecture and the constraints placed on the freedom of inmates is evident.”

There was also work by Jhafis Quintero, who had been in prison for ten years and had discovered art as a way of channelling the energy that had led him to crime. His exhibit was ten videos, each representing a year in prison. This was in the basement of the Bond Store building, which is dark with a low roof and has a very claustrophobic atmosphere that matched these two exhibits perfectly.

One work that was particularly interesting was “Prohibition” by Nicolas Daubanes, which is a collection of hundreds of litres of “hooch” he has brewed using prison recipes, using materials readily available in prison—plastic bottles, water, fruit, condoms and yeast. I wonder what MONA will do with this after the exhibition is over.

Nicolas Daubanes’ iron filing picture of the Isle of the Dead at Port Arthur was also intriguing, despite the smeary hand mark that an over-enthusiastic visitor had, unfortunately, made on it. The TMAG staff member on duty said it had been interesting to watch the picture being made, but he wasn’t sure what would happen to it after the exhibit finishes.

We couldn’t see the virtual reality exhibit “Orbital vanitas” as you have to be 13 to see it and Kramstable was too young, so I’m going to have to go back to see that by myself. Actually, I want to go and see the whole thing again, take my time and absorb it more fully.

The 20th Century Tasmanian gallery is always one of my favourites and something different catches my eye every time I’m in there. This time it was the Hydro-Electric Department poster, which was fitting because of our recent visit to Lake Pedder and the Gordon Dam (more posts on that are coming). 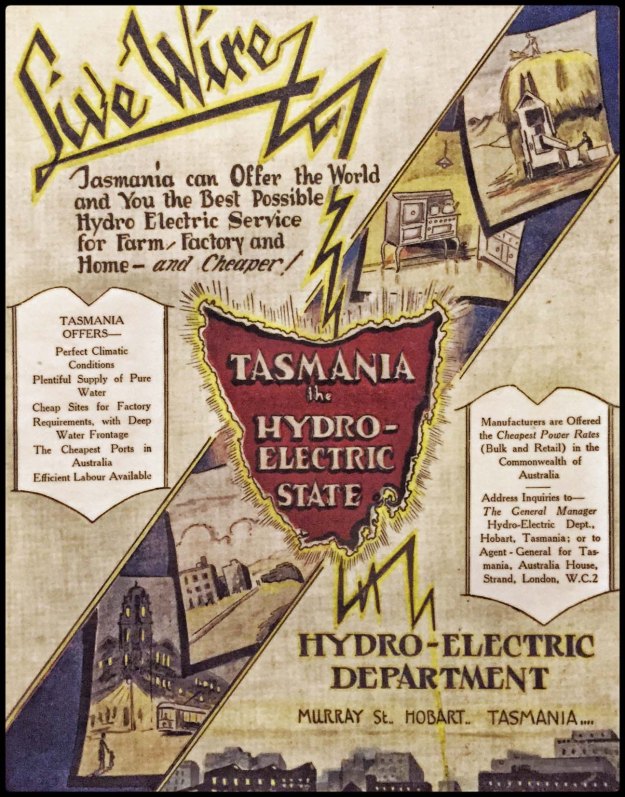 We spent a bit of time at the Antarctic exhibit and I learned something in the currency exhibit: In 1966 when Australia introduced decimal currency there was no $5 note. That didn’t come until 1967.

I always enjoy visiting TMAG and am glad we have such a great space in our city.

1 thought on “Hanging out at TMAG”